In Module 4, we will review nanoparticles. These materials, once bioconjugated, provide the promise of combining imaging and malignant cell destroying functionality. These nanoparticles include:

Quantum dots, also known as nanocrystals, are a special class of materials known as semiconductors, which are crystals composed of periodic groups of II-VI, III-V, or IV-VI materials. Semiconductors are a cornerstone of the modern electronics industry and make possible applications such as the Light Emitting Diode and personal computer. Semiconductors derive their great importance from the fact that their electrical conductivity can be greatly altered via an external stimulus (voltage, photon flux, etc), making semiconductors critical parts of many different kinds of electrical circuits and optical applications. Quantum dots are unique class of semiconductor because they are so small, ranging from 2-10 nanometers (10-50 atoms) in diameter. At these small sizes materials behave differently, giving quantum dots unprecedented tunability and enabling never before seen applications to science and technology.

These quantum dots promise to provide greatly enhanced capabilities for medical imaging and diagnostics.  These new nanoscale materials have increased intensity of fluorescent light emission when illuminated with excitation radiation, have longer lifetimes for fluorescing, and provide a much broader spectrum of excited colors than that obtainable with conventional materials.

These dots are bright, photostable fluorophores and have a broad excitation spectrum but a narrow Gaussian emission at wavelengths controllable by the size of the material. QDs allow for efficient multicolor imaging of biological samples and should be especially useful for fluorescence imaging in living tissues, where signals can be obscured by scattering and competing intrinsic emissions. Applications for these are shown below. 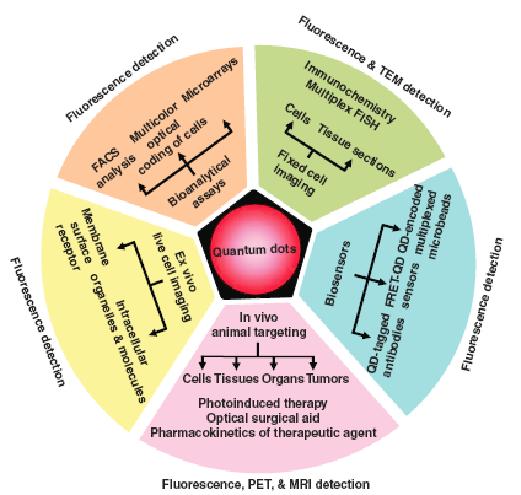 The surface of quantum dots must be modified to adequately maneuver within the body (neither II–VI nor III–V semiconductor nanocrystals are water soluble). Surface functionalization with molecular species such as mercaptoacetic acid or the growth of a thin silica layer on the nanoparticle – facilitate aqueous solubility. For example, a silica layer with protein attachment to a mercaptoacetic acid coating would permit the nanoparticles to be relatively biocompatible. Quantum dots embedded within polymer nano- or microparticles – improve biocompatibility while maintaining the unique fluorescence.

New coatings have been developed that make QDs appear as protein-like entities and thus are not seen by live cells as toxic. In addition to the capacity to paint and observe many different proteins with separate colors, quantum dots can be used for the ultimate detection sensitivity: observing a single molecule.  Until now, tracking and following a single protein in the cell has been extremely challenging and was the equivalent of searching for the proverbial needle in a haystack.

Peptides have been recently utilized to improve quantum dot solubility in aqueous solution, and in connecting quantum dots to targeting protein and peptide ligands. Incorporation of cell-penetrating peptides on quantum dot surfaces has allowed for the translocation of functionalized quantum dots into cells for intracellular imaging applications.

In application, one could develop a synthetic peptide modeled after the protein that the human immunodeficiency virus (HIV) uses to enter cells. This would allow the development of quantum dots that can penetrate the cell membrane and image internal structures in a cell.

The first step would involve creating CdSe(ZnS) quantum dots and then coating them with the molecule dihydrolipoic acid (DHLA). This is a biocompatible, water-soluble molecule. The next step would be to attach a short peptide (such as the amino acid histidine) to one end of a larger peptide with a specific application of targeting. Poly(histidine) has a tight bond to DHLA, forming a strong nanosized particle.

The peptide-quantum dot bioconjugates can be used to study how quantum dots move inside HIV cells. This model would allow us the opportunity for gaining a better understanding of nanoparticle movement within HIV cells.

Potential issues with quantum dots include semi-conductor toxicity and development of a purging plan from the body after use.

Gold nanoparticles called nanoshells are being investigated for uses in both imaging and destroying cancerous cells. Nanoshells can be engineered to target cancerous cells and at the same time designed to interact with specific wavelengths of light. Depending upon the wavelength of incident light, nanoshells can either scatter or absorb light, creating applications as both a cancer imaging agent or therapeutic one. Investigators have performed successful studies that prove nanoshells can be used to create high-resolution images of tumors as well as a precise treatment procedure that causes cell death in tumors.

Gold Nanoshells can be made either to absorb or scatter light preferentially by varying the size of the particle relative to the wavelength of the light at their optical resonance. The ability to engineer these particles is critical to in vivo therapeutic applications.

The minimum absorption for human blood and tissue is near infrared wavelengths. Nanoshells with absorption in the infrared wavelength range (600-1100 nm) has the ability to enable an external laser to deliver light for thermal ablation or imaging. Gold nanoshells can absorb near IR radiation, which increases local temperature upon irradiation. These nanoparticles can accumulate at the cancer site and can kill the malignant cells upon irradiation.

Metal nanoparticles has the ability to be conjugated for better use. For example, we can attach antibodies to gold shells to specifically recognize and target cancer cells to increase the efficiency of thermal ablation, or for cancer imaging.

Magnetic nanoparticles can be manipulated using magnetic field. Here, there is a need for high magnetization so that their movement in the blood can be controlled with a magnetic field to be targeted close to the pathologic tissue. In addition, the size of these particles can be engineered for use as diagnostic tools. These particles commonly consist of magnetic elements such as iron (present in the human brain), nickel and cobalt and their chemical compounds.

One commonly used application is magnetic resonance imaging (MRI). The body is mainly composed of water molecules which each contain two hydrogen nuclei or protons. When a person goes inside the powerful magnetic field of the scanner these protons align with the direction of the field. Diseased tissue, such as tumors, can be detected because the protons in different tissues return to their equilibrium state at different rates. By changing the parameters on the scanner this effect is used to create contrast between different types of body tissue.

Magnetic nanoparticles are used as contrast agents. These agents may be injected intravenously to enhance the appearance of blood vessels, tumors or inflammation. Contrast agents may also be directly injected into a joint in the case of arthrograms, MR images of joints.

This supplemental reading provides an overview of properties and design of contrast agents such as dye-doped silica nanoparticles, quantum dots and gold nanoparticles for non-invasive bioimaging.