Module 3 reviews the various polymer materials that are currently under investigation as drug carriers. These nano-materials have unique chemical and molecular properties that can be engineered to function well within the body. These materials include:

Proteins and peptides serve as the major molecular scaffold material of the biological world at the nano-scale, micro-scale, and macro-scale.

Peptides are short polymers formed from the linking, in a defined order, of α-amino acids. The link between one amino acid residue and the next is known as an amide bond or a peptide bond. Proteins are polypeptide molecules (or consist of multiple polypeptide subunits). The distinction is that peptides are short and polypeptides/proteins are long. There are several different conventions to determine these, all of which have caveats and nuances. 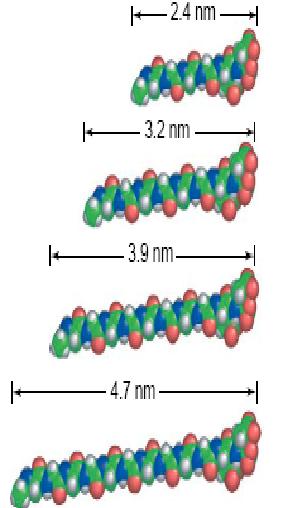 The molecular and chemical properties are similar to lipids, and are highly stabile. Peptide packs through intermolecular hydrogen bonds along the backbone, in addition to between the amino acid side chains.

A liposome is a tiny bubble (vesicle), made out of the same material as a cell membrane. These lipid vesicles are formed when thin lipid films are hydrated and stacks of bilayers become fluid and swell. Liposomes can be filled with drugs, and used to deliver drugs for cancer and other diseases. 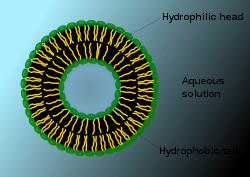 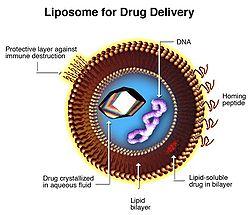 The liposome membrane is made up of phospholipids, and has a hydrophilic head and a hydrophobic tail. In the presence of water, the heads are attracted to water and line up to form a surface facing the water. The tails are repelled by water, and line up to form a surface away from the water. In a cell, one layer of heads faces outside of the cell, attracted to the water in the environment. Another layer of heads faces inside the cell, attracted by the water inside the cell. The hydrocarbon tails of one layer face the hydrocarbon tails of the other layer, and the combined structure forms a bilayer.

The properties of liposomes, notably its ability to entrap and retain virtually any pharmacologically active agent, and its structural versatility and an apparently innocuous nature, are all attributes of a potentially powerful tool for the control of drug action.

Liposome can be produced by an ever increasing variety of techniques. They are composed of one, a few, or many concentric bilayer membranes which alternate with aqueous spaces, and have a size that can be as small as 25 nm in diameter or as large as several microns. Depending on their solubility and the method adopted, antimicrobial, cytotoxic and other conventional drugs, enzymes, antigens, hormones, genetic material, viruses and bacteria can be incorporated, often quantitatively, in the aqueous or the lipid phase of liposomes.

Dendrimers are spheroid or globular nanostructures that are precisely engineered to carry molecules encapsulated in their interior void spaces or attached to the surface. Size, shape, and reactivity are determined by generation (shells) and chemical composition of the core, interior branching, and surface functionalities.

Dendrimers are constructed through a set of repeating chemical synthesis procedures that build up from the molecular level to the nanoscale region under conditions that are easily performed in a standard organic chemistry laboratory. The dendrimer diameter increases linearly whereas the number of surface groups increases geometrically. Dendrimers are very uniform with extremely low polydispersities, and are commonly created with dimensions incrementally grown in approximately nanometer steps from 1 to over 10nm. The control over size, shape, and surface functionality makes dendrimers one of the “smartest”or customizable nanotechnologies commercially available. 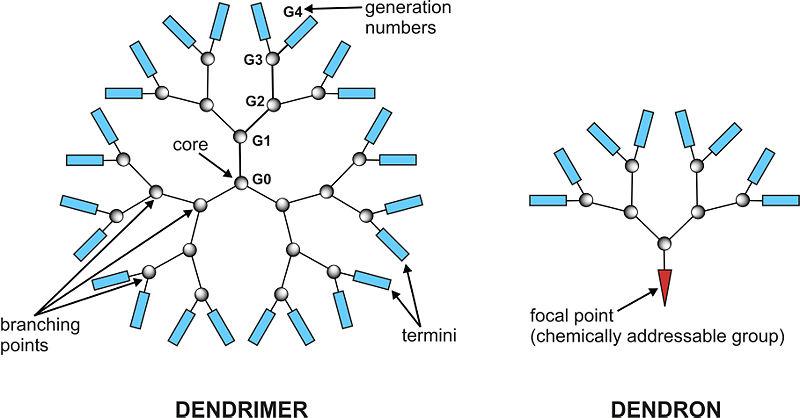 A micelle is an aggregate of surfactant molecules dispersed in a liquid colloid. The micelle must have a strongly polar “head” and a non-polar hydrocarbon chain “tail”. When this type of molecule is added to water, the non-polar tails of the molecules clump into the center of a ball like structure because they are hydrophobic or “water hating”. The polar head of the molecule presents itself for interaction with the water molecules on the outside of the micelle. 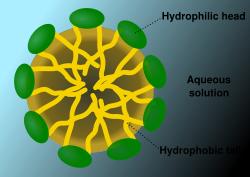 Polymeric micelles are nanocarriers that water-solubilize hydrophobic drug molecules. These polymers are designed with a branched, hydrophobic interior (core) and hydrophilic exterior (shell) to maintain physical properties characteristic of conventional micelles, but with enhanced thermodynamic stability.

These nano-materials can be conjugated (or modified) through attachment or modification using other molecules. Bioconjugation is the process of coupling two biomolecules together in a covalent linkage. This enhances the conjugate’s selectivity to bind and attack to cancer cells, for example. Enhancements include the addition of hydrophobic, hydrophilic, amine, anti-body, or other end-group that enhances biocompatibility, selectivity, drug carrying ability, drug or protein attachment, or other critical functionality. The picture below shows the conjugation of a protein to a drug. The drug-protein conjugate is highly selective to a cancer cell, and ultimately delivers the drug to the malignant cell.

Biomaterials can be fabricated via two methods- top down or bottom up approaches. Top down involves the down sizing of macromolecules. Bottom up involves systemic assembly of atoms, the basics of matter. There are many advantages of the bottom up approach. This includes the ability to produce smaller and more perfect geometries, organic semi conductors, and is more economical than top down approaches due to lower waste generation.

There are several bottom up approaches that can be considered- self assembly, chemical vapor deposition, pulse laser vaporization, carbon arc discharge, chemical reduction of metal salts, and electrochemical pathways- just to name a few. All of these techniques have advantages and disadvantages. For this discussion, we will focus on two bottom up approaches- self assembly of peptides and chemical reduction of metal salts.

Self assembly is a strategy that emulates that of nature, and offers the most promising route for creating a large variety of nanostructures. The self assembly of peptide-based nano structures is one example that can be used for scaffold material. These nano structures offer several advantages over proteins- minimal immunologic response, no undesired activity, and better thermal and chemical stability. We start with building blocks that contain at least two moieties. One is biologically active, and another that directs assembly. Simple peptides are synthesized with amphiphilic characteristics (via a hydrophobic tail and hydrophilic portion head). The hydrophilic component of the amphiphile offers solubility in the body, while the hydrophobic serves two functions. One is to shields itself from water (which directs self assembly) and interaction with biological membranes. An example of a self assembled peptide would be based on hydrophobic residues (such as valine, alanine, or leucine) repeats for the hydrophobic tail, and amino acids (such as aspartic acis) as the hydrophilic head. Rod like micelles, vesicles, and hollow tubes were produced by Vauthey et al.

This supplemental reading below reviews the process and applications of peptide self-assembly into nanotubes, nanospheres, nanofibrils, nanotapes, and other ordered structures at the nano-scale

This supplemental reading below reviews bottom-up design of biomimetic assemblies.