The objective of Module 4 is to introduce various chemical treatment techniques for treating water and wastewater, including:

Coagulation and flocculation of microorganisms is of practical importance in wastewater treatment because flocculated organisms are relatively easy to collect from the various streams in a wastewater treatment plant. In the previous module, we discussed the physical aspect to flocculation. Here, we discuss the chemical coagulation. Chemical coagulation of biologically treated waste waters is most often the initial step in water renovation systems. Coagulants used today generally consist of alum, lime or a synthetic polyelectrolyte. Separation of the floc is accomplished by flotation or sedimentation. 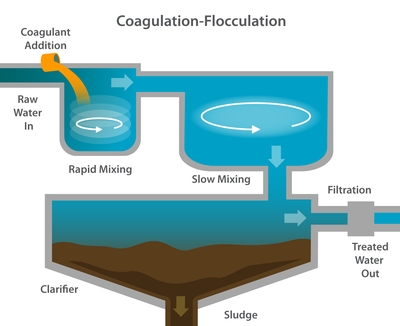 Coagulation of wastewater may be accomplished with any of the common water coagulants including lime, iron and aluminum salts, and synthetic polymers. The choice is based on suitability for a particular waste, availability and cost of the coagulant, and sludge treatment and disposal considerations. For example, iron is sometimes available at no cost as a waste product in the form of pickling liquor, and its presence in sludge presents no particular problems for anaerobic digestion. Lime generally provides good clarification, a rapidly settling sludge, and permits the use of a simple method of recovery that also insures destruction of most sewage solids in the resulting sludge.

An important aspect of wastewater purification and clarification is the removal of suspended colloidal material and as much of the solutes as possible. To remove colloidal material, a floc forming chemical is needed. Most floc forming chemicals are tied up with peripheral chemicals which cause the resulting effluent to have a greater total dissolved solids (TDS) content. If this water is being reused, the high TDS levels contribute to a high final water usage cost.

Perhaps the floc chemical could be put into the contaminated water in its ionic form, without adding the peripheral chemicals. This should be ideal, because the colloidal contaminants and soluble contaminants that would react with the floc chemical could be removed. The results would be a clarified water with a reduced TDS. Considerable research has been undertaken to evaluate methods by which these objectives could be obtained. One possible approach is treatment through electrochemistry.

Electrochemistry is defined as the use of direct current to cause sacrificial electrode ions to move into an electrolyte and remove undesirable contaminants either by chemical reaction and precipitation, or by causing colloidal materials to coalesce and then be removed by electrolytic flotation. The electrochemical system has proven to be able to cope with a variety of wastewaters. These waters include paper pulp mill waste, metal plating, tanneries, canning factories, steel mill effluent, slaughter houses, chromate, lead and mercury-laden effluents as well as domestic sewage. These waters may be reduced to clear, clean, odorless and reusable water that may even be of better quality than the water from which it originated.

Limestone dissolved in water is termed “hardness”. Ground water dissolves limestone from deposits formed eons ago through the following steps:

Calcium carbonate is moderately soluble in water and will come out of solution (i.e., form a precipitate) in the form of a hard scale when its concentration in water exceeds its solubility constant. This tendency may cause build-up in hot and cold water pipes, water heaters, boiler tubes, cooling towers and any other surfaces it contacts. It also reacts with soap and detergent forming a precipitate in the form of a “scum” which is evident as spotting on glasses and silverware and as “bathtub ring”. The buildup in boilers can interfere with the transfer of heat and can even lead to boiler tube failure.

Conventional water softening is most often based on a process known as ion exchange, utilizing a synthetic polymeric (plastic) material in the form of very small beads called ion exchange resin. The resin is porous so that each bead has tremendous surface area and the surface area is chemically constructed to contain billions of active or “exchange sites”. These sites have considerable affinity for metals in the water with valences (i.e., charges of +2 and +3). Thus, when water containing calcium, magnesium (the two major constituents of hard water), dissolved iron, copper or aluminum, the active sites attract and “hold” these ions. However, in order to do so, the sites must have a less tightly held ion to “exchange” for the metal hardness ions. While the resin does not prefer ions with a single charge, fortunately under conditions of high concentration and extended time of exposure, sodium ions can be “forced” onto the active sites by slowly passing a concentrated solution of sodium chloride (table salt) over the resin. Thus, a relatively inexpensive, readily available, safe chemical can be used to “regenerate” the resin. Ion exchange resins are also used to produce high purity Demineralized water but the resin and regeneration chemicals are different.

Disadvantages include the need to dispose of waste water high in salinity and the fact that water treated with an ion exchange water softener has sodium added. According to the Water Quality Association (WQA), the ion exchange softening process adds sodium at the rate of about 8 mg/liter for each grain of hardness removed per gallon of water. A “grain” of hardness is equal to 17.1 mg/l or ppm of calcium carbonate.

A water softener typically consists of two tanks, a larger one into which rock or pellet salt is added and a smaller tank containing the ion exchange resin through which the hard water passes. A control valve fixed atop the resin tank causes the system to recharge or regenerate based on passage of a pre-set time or it meters the water treated and initiates regeneration based on a pre-set number of gallons treated. When regeneration is initiated, the first step is to backwash the resin bed with raw water to fluff the resin and remove entrained dirt and sediment. Then brine is slowly deducted from the salt tank at a set flowrate for a specific time (set as a function of the resin volume and the influent water hardness), followed by a slow draw of raw water to slowly displace the brine solution. This is followed by a faster flow of raw water to thoroughly flush any remaining salt from the resin bed. During this entire process, the control valve either prevents raw water from flowing to service or allows raw water to by-pass the softener during regeneration. Often two parallel units are operated in order to avoid any interruption to soft water.

Disadvantages to conventional softening are consumption of copious volumes of salt and the discharge of highly saline waste water from the regeneration step.

Neither iron nor manganese in water present a health hazard. However, their presence in water may cause taste, staining, and accumulation problems.

Because iron and managanese are chemically similar, they cause similar problems. Iron will cause reddish-brown staining of laundry, porcelain, dishes, utensils, and even glassware. Manganese acts in a similar way but causes a brownish-black stain. Soaps and detergents do not remove these stains, and the use of chlorine bleach and alkaline builders (such as sodium carbonate) can actually intensify the stains.

Iron and manganese deposits will build up in pipelines, pressure tanks, water heaters, and water softeners. This reduces the available quantity and pressure of the water supply. Iron and manganese accumulations become an economic problem when water supply or softening equipment must be replaced. There are also associated increased energy costs, like pumping water through constricted pipes or heating water with heating rods coated with iron or manganese minerals. 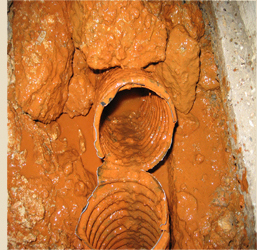 Sources of Iron and Manganese in Waste Water

Iron and manganese are concentrated in water by contact with rocks and minerals, and occasionally man-made materials like iron and steel pipes. It is usually groundwater supplies that may require treatment for high levels of iron and manganese. Generally speaking, few surface water supplies have high enough levels of either to cause problems. Occasionally discharge of acid industrial wastes or mine drainage may increase iron or manganese to problem levels in surface water.

An additional source for dissolved iron may be the pipelines through which water flows. Water with high salinity or acidity from dissolved carbon dioxide or other acids will be corrosive to metal pipes. In order to establish equilibrium, iron and other metals will be dissolved from the pipelines. If household pipes are being attacked by corrosive water and cause problem levels of metals such as iron, copper, and lead, the water can be treated to reduce corrosivity and level of dissolved metals.

Because different metals are more or less corodable, a solution to the problem may be to use a more resistant metal. A plumber should be consulted regarding materials that are best suited to local water conditions.

How Much Is Too Much?

How much iron or manganese in the water is needed to cause these sorts of problems? Standards for iron and manganese are based on levels that cause taste and staining problems and are set under EPA Secondary Drinking Water Standards. For most individuals 0.3 parts per million (ppm) of iron and 0.05 ppm of manganese is objectionable. Usually iron and manganese do not exceed 10 ppm and 2 ppm, respectively, in natural waters. Iron and manganese are found at higher concentrations; however, that condition is rare.

There are several options for removing iron and manganese from wastewater, including: 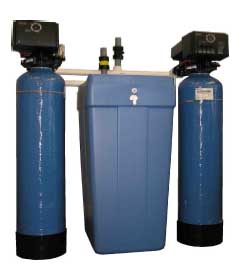 Polyphosphate treatment is a relatively cheap way to treat water for low levels of iron and manganese. Depending on the type of polyphosphate used, water with 1 to 3 ppm of iron can be adequately treated.

One of the disadvantages of depending on ion exchange for iron and manganese removal is precipitation by oxygen. Some of the precipitate becomes tightly bound to the exchange resin and over time reduces the exchange capacity by plugging pores and blocking exchange sites. If iron bacteria are present, the problem is even worse. Also, if suspended particles of insoluble forms of iron or manganese are present in the water prior to softening, they will be filtered out on the resin and cause plugging. Suspended iron and manganese should be filtered out before water enters the softener.

One of the first types of filters to be used to treat water was the “greensand” filter. The active material in “greensand” is glauconite. Glauconite is a green clay mineral that contains iron and has ion exchange properties. Glauconite often occurs mixed with other material as small pellets, thus the name “greensand.” The glauconite is mined, washed, screened, and treated with various chemicals to produce a durable greenish-black product that has properties that allow it to adsorb soluble iron and manganese. 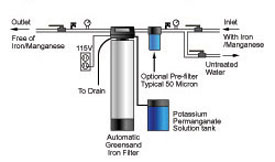 Eventually the greensand must also be regenerated by washing with a permanganate solution. Regeneration will leave the greensand grains coated once again with a manganese material that adsorbs soluble iron and manganese. Frequency of regeneration will depend on the level of iron, manganese, and oxygen in the water and the size of the filter. The manufacturer’s recommendations should be followed.

Chemical oxidation followed by filtration is the accepted method of iron and manganese removal when concentrations are greater than 10 ppm. There are a number of strong oxidants that have been used in this procedure, including chlorine based chemicals (i.e. sodium hypochlorite, bleach).

The physicochemical treatment of the wastewater from a meat processing industry was studied using three ferric salts as coagulants in conjunction with four different polymers as coagulation aids by batch column flotation.